The influence of olive oil in the lives of the people of the Hellenic region covers a wide spectrum over the years.

The origin of the olive tree in mythology

In Greek mythology the value of olive oil, became significant from the time Poseidon, the god of the sea and Athena, the goddess of wisdom and the arts, competed against each other over the name of the city.
It was on the hill of the Acropolis in the presence of the other ten gods and king Kekropas. The one who would present the most valuable gift to the people would win. First Poseidon struck the earth with his trident and produced seawater and a white horse. Then Athena tapped the Athenian ground and the first olive tree appeared. This was considered to be the most valuable gift, so the city took its name after the goddess Athena.
Since then in the vicinity of Attica, with its mild climate and proximity to sea water the olive tree prospered. 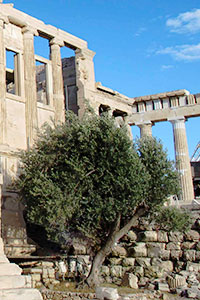 ‚Äã‚Äã‚Äã‚Äã‚Äã‚Äã‚Äã
The Sacred Olive Tree situated by the north side of the Erechtheion on the Acropolis of Athens. Its position is traced back to the legendary spot, where Athena first planted it. In the words of Pausanias, it sprouted a new branch four feet long, the day after the Persians burned the Acropolis in 480 BC and every time an invader cut it down, a sprig was saved and replanted. The most recent replanting was in 1942.

The olive in ancient sport games

Olive as symbol of peace

The olive in cultural exchange and economy

That explains why it is the general feeling in Greece that here, is the cradle of the Mediterranean diet.